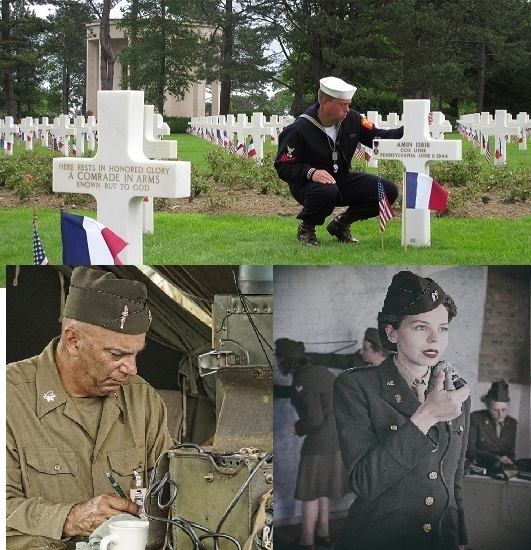 CONNEAUT — Some are flying thousands of miles from faraway places such as Chile, Belgium and South Africa. Others are driving here, spending 1-2 days on the road. All told, 1,800+ military and civilian reenactors will converge upon Conneaut for D-Day Ohio August 15-16-17.

EyeonCleveland.com reached out to the World War II reenactment community with that question, and we learned there are several reasons why so many choose to become involved in reenacting, and then re-creating living histories in the process.

Some of the main ones are:
⦁ In tribute to the men and women who fought in World War II
⦁ A love of keeping history alive
⦁ A deep appreciation for the hard work of the D-Day Ohio Board and organizers and the town of Conneaut.
⦁ A “comrades in arms” spirit, very powerful in the reenactment community, and
⦁ Appreciation for the geography and logistics at D-Day Ohio as well.

Here are a few of their stories. (Editor’s note: If you want to know even more about D-Day Ohio, the best resource for information is the organization’s website: www.ddayohio.us)

COMING FROM BELGIUM TO BE WITH FAMILY

Karl Rosenkranz will be flying to Ohio from Belgium to participate. He strives to bring to life the role of chief executive officer for the German High Command, defending Normandy. “I’ve been reenacting WWII For 23 years, beginning when I was 16. I saw a reenactor display at an air show,” he recalls. “After year of listening to stories from my grandfather and father, and watching military movies, I was instantly hooked on the hobby.”

Rosenkranz, known as Rosey in the reenactment community, says that reenactors typically spend $1,000 or more for a ‘basic kit’ which includes a uniform and a weapon. Then they invest time and effort learning what their persona or soldier would have been like in real life, in 1944.

There’s a common theme among veteran reenactors, one which Rosenkranz echoes: Appreciation of everyone in the reenactor communities whose collaborative efforts help bring history to life.

“All the reenactors I’ve know never miss a chance to learn something new about any era,” he explains. “Some are prior military. Others are from various elements of emergency services, and some are fellow history geeks. For some reenactors (at Conneaut) it will be the only time each year we see each other. We are taking a break from our normal lives and recharing our batteries. Simply put, we’ve become family.”

Also, Rosenkranz is a member of the Commemorative Air Force and is a qualified HE-111 flight engineer as well as B-17 loadmaster.

A HOMECOMING, AND THE WACs WILL BE THERE IN FORCE!

For Molly Sampson Cooper of Mount Blanchard, Oh, D-Day Conneaut is a homecoming of sorts. “I started WWII reenacting at D-Day Conneaut in 2009,” she recalls. “I had grown up reenacting the American Revolution … and my younger brother had gotten interested in WWII reenacting through a 4H Living History Project….he coerced me into attending D-Day with him, and despite my initial unwillingness it was so enjoyable that I switched primary time periods.”

Cooper did more than just that. She formed the 1st Women’s Army Corps (WAC) Living History Group in 2013, which now has dozens of members. “Our unit, 1st WAC Bn HQ Company, has the largest geographic spread of any of the 1st WAC companies, and this year will be joined by a few members of other companies, from Williamsburg, Va, and Los Angeles, respectively (at Conneaut), bringing our event attendance to about two dozen.

“Our members range in age from 16 to 50, and we come from a wide variety of academic and professional backgrounds, brought together by a shared passion for the history of the Women’s Army Corps during WWII,” she adds. “Conneaut has more utilization of materiel than other reenactment event, both in tactical scenarios and for support and civilian roles.”

One of the unique aspects Cooper likes is the Joint Allied Signals. “We have a fully operational Message Center and telephone system we erect in the Allied Camp for the event, and we use it to communicate between units,” she explains.

BIG RED ONE WILL BE ON HAND

Colonel Jim Pereira will come from Massachusetts to lead the U.S. Army’s 1st Division for the second straight year. A long-time reenactor, he is also the commander of the famous 26th Infantry Div., Yankee Division, the largest Allied unit in New England with 125 members.

“I have been in reenacting for about 34 years, starting with 20 years in Civil War (CW) and the last 14 in World War II, he says. “My love for history began as a child on a family trip to Gettysburg. I enjoyed my years doing CW, rising in rank … but I had always had interests in other time periods. About 15 years ago I was doing some research and started looking into WWII reeanacting, visited a unit, liked what I saw, and decided to join.”

Pereira, an educator who’s attended and participated in dozens of reenactments and living histories, calls D-Day Ohio the pinnacle of reenacting. He says, “Conneaut is the biggest, and I might add, best run event in the country, and that also includes other time periods.

“The location is excellent. Conneaut beach is a fantastic piece of geography, and that’s needed to pull such an event off,” Pereira adds. “The town support is unbelievable in the way it turns out for this event with logistics and support.

“Another key aspect is the organization. Many event organizers are reenactors themselves, which separates D-Day Ohio from other events,” he points out. “This group is so reenactor friendly, and it does everything it can to make the participants’ experience a great one.”

HAS TO BE AIRBORNE

Among the many brave Allied forces going into action on D-Day were more than 20,000 U.S. and British paratroopers. Made famous in the HBO series “Band of Brothers” were the exploits of the U.S. Army’s 82nd Airborne Division.

Tech. Sergeant Don Grout of Winston-Salem is in the 504th Parachute Infantry Regiment, part of the 82nd Airborne. “My unit usually brings 15-18 guys (to D-Day Ohio),” he says. “Most of us fall in with the 2nd Rangers for the beach landing, and the rest do Army Air Corps. Lots of us do both” (Brief historical note: In WWII, there was no such thing as the Army Air Corps. In early 1941, the official name for the air wing of the Army was called the U.S. Army Air Forces. In 1947 the name was changed again to just the U.S. Air Force.)

Grout came to reenacting just a few years ago. “Word War II history has been a hobby of mine since childhood, but I never had an outlet to pursue it until finding out about reenacting in 2016,” he explains. “Keeping history with young people camaraderie with other guys like me, and most of all interacting with World War II veterans is what I love the most.”

NEVER FORGET THE LONGEST DAY OR THE NAVIES INVOLVED

There were 16 million Americans who entered the nation’s Armed Services in World War II. Twelve of them were relatives of D-Day Conneaut’s WWII Veteran Liaison Eric Montgomery. Montgomery’s focus at D-Day Conneaut lies in remembering his great uncle, Amin Isbir, killed on June 6, 1944 while serving with the 6th Naval Beach Battalion. As a tribute to his great uncle, Montgomery leads a reenacting unit of some 20 men to recreate what had been called the “Son’s of Beaches.”

Montgomery will be coming back to DDay Ohio from Elizabethton, Tenn. He’s been a regular fixture at the event since 2003 and part of the Organizing Committee since 2008. In 2009, Eric began designing the annual challenge coin that is sold at the event. The 11-coin series features signature events of Operation Overlord. This year’s coin, “Peace and Remembrance” pays tribute to those that fell in battle which lie at peace in cemeteries scattered all across Normandy.

The story of Montgomery’s great uncle Amin, as well as additional family members, can be found on Montgomery’s web site at www.soldiersandsailors.us. He was the keynote speaker at the National D-Day Memorial in Bedford Virginia on June 6th, 2012, when his great uncle’s name was added to the Memorial’s Necrology Wall.

He is also one of the leaders behind acknowledging attending veterans at D-Day Ohio’s Veteran Hospitality Tent and organizes the Salute to Veterans Ceremony. (There will be more about this in Part III.)

Montgomery has traveled to Normandy and been a part of remembrance events there. “Outside of visiting my great uncle’s grave, the place of his death on Omaha Beach and telling his story, most important to me is helping to place the American and French Flags upon the graves of our fallen. It has been my honor and privilege to assist the dedicated team of French caretakers in completing this solemn task on five separate occasions,” he recalls.

In addition to his involvement in the reenactment community, Montgomery is a civilian volunteer participating in funerals for military veterans as a member of the Carter County Tennessee Honor Guard.

REMNANTS OF THE GREATEST GENERATION WILL BE PRESENT

John Francis Davis will return to D-Day Conneaut for perhaps the most important of reasons, to remember his fallen band of brothers. Davis, 95, is from Plymouth, Ind. He’s one of 16 of about 150 WWII and Korean War veterans (registered so far) who were there, fighting at Normandy to liberate France on June 6, 1944. It is believed D-Day Ohio will be the largest gathering of WWII veterans for an event in the U.S. in 2019.

“I have been to Conneaut twice now, and enjoyed it both times,” he says. “I landed on that June Day, Omaha Beach and I’m very proud of what I did for my country. God bless this country of ours.” Davis also received the French Legion d’honneur at D-Day Conneaut in 2018.

Of course some are traveling from much further distances just to honor attending veterans. “Two people I met in Normandy, Luis Glez and Maria Coloma are coming from Spain to assist with the Veteran Program,” Montgomery says. “I met them only briefly at what was the Allied Press Center in the small French Village of Vouilly. Notables like Ernie Pyle were in place along with so many others, like General Bradley where he planned Operation Cobra along with George Patton. Glez and Coloma are coming not as reenactors, but to volunteer.”