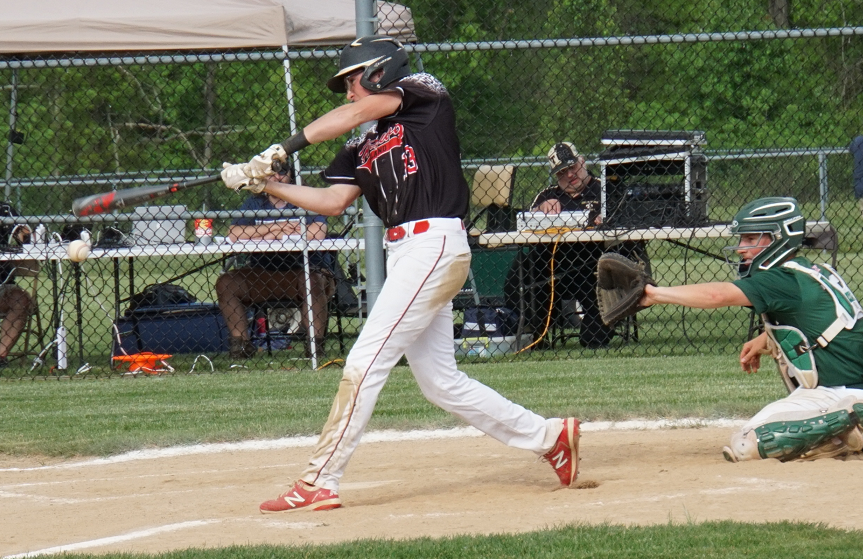 (Editor’s Note: Eye on Cleveland’s John Kerezy took in the OHSAA Division II Revere v. Beachwood game on Monday afternoon in Richfield [Revere won 10-0] then traveled down I-77 to report on this contest. You can see his story on Revere’s triumph here: https://wp.me/p6cQl4-6d)

NEW PHILADELPHIA – Hiland’s high-flying baseball team scored twice in the first inning, then rallied around the strong pitching of senior Casey Lowe for a 2-0 shutout of Shenandoah’s Zeps in an OHSAA Division IV East District semi-final contest on Monday evening.

Lowe struck out 10 opposing batters while walking five and yielding only two hits. His opposite number, Dayton Hill, tossed a five-hitter at Hiland and perhaps deserved a better fate. No one could have predicted that the Hawks first-inning fireworks would be the only runs of the game.

And that’s the way it stayed for the remainder of the contest. Time and time again Hiland’s defense exhibited good leather and minimized Shenandoah’s scoring threats.

“They (our players) work for each other,” says Hiland Coach Chris Dages after the game. “We just kind of point them in the right direction, and they drive each other.”

Through the first four innings, Lowe allowed only two hits and faced just 15 batters. The Zeps left a runner stranded on third base in the fifth inning, and then loaded the bases in the sixth frame. But Hiland’s hurler got critical outs when they were needed.

Schlabach added a single to his triple, leading all batters with two hits. Besides him and Casey Lowe, Nolan Yoder and Grant Miller also stroked safeties for Hiland. Perkins and Wyatt Rogers were the only Zep batters coming up with hits.

Shenandoah finishes the 2021 season with a 19-9 mark under first-year head coach Tyler Engle. It also placed second in its division of the Ohio Valley Athletic Conference (OVAC).

Hiland will meet Shadyside in the Division IV Regional Final game on Wednesday at 5 p.m. Shadyside’s Tigers have a 22-6 mark under Coach Shawn Selmon, and defeated Toronto H.S. 11-3 on Monday night. Shadyside is located about 30 miles south of Steubenville, along the Ohio River.

WKLM broadcasted Monday night’s Hiland-Shenandoah game back to Berlin and to anyone who was listening on their station’s internet stream.  Brandon Benter handled play-by-play duties with excellence. The game was also streamed on WKLM’s YouTube site.

About 100 Hiland fans traveled east down Ohio Route 39 to Tuscarawas Central Catholic to see the game in person.

Coach Dages had Nolan Yoder warming up in the bottom of the 6th inning just in case he was needed in relief to close out the contest. But Casey Lowe finished strong in the 7th with a strike out, ground out, and a flyout sandwiched around a walk.

Both teams left seven runners on base, and both committed one error. Grant Miller, Collin Lowe, Nolan Yoder and Alec Weaver each had a stolen base for Hiland.

Tuscarawas Central Catholic was the host for this District Semi Final game. As of this writing, the site for Wednesday’s Hiland-Shadyside contest is unknown.